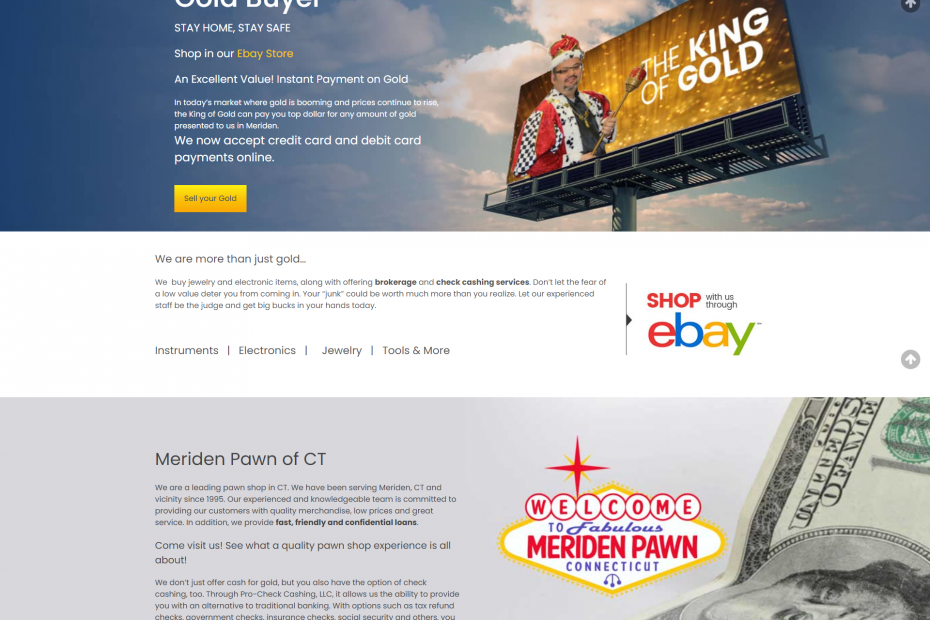 The self-titled “Gold King” Michael Martorelli of Meriden Pawn came to Elvin Web Marketing with a good website in 2019, but not much SEO value.  He had worked with web development agencies in the past. He felt they were more interested in taking huge fees rather than focusing on the growth of his business. So it fell to Elvin Web Marketing to pick up the baton and drive the brand forward.

Meriden Pawn has been known and respected as a trusted pawnshop in Meriden since the 90s.  It had enjoyed a good reputation and recognition in the public’s consciousness.  But in 2019 still didn’t have a lot of recognition online outside those who were already customers.  The goal given to us was to keep the Meriden Pawn brand strong online, and to increase the recognition for its gold buying and selling expertise.  The next generation is looking online and quite rightly Michael recognized that’s where Meriden Pawn needs to be seen going forwards.

Before starting our SEO campaign here at Elvin Web Marketing the Meriden Pawn website had just 7 pages, and not much content, nor was any of it optimized for search engines.  Most of the traffic the website was getting was for people specifically searching for Meriden Pawn, not new customers.

Today the website has more than double the number of pages, with information about the types of gold that can be bought and sold at Meriden Pawn, and the many types of items that are accepted such as power tools, jewelry and tech.  Before this Google had little knowledge of exactly what it was that Meriden Pawn offered compared to other pawnshops. Now Google knows that Meriden Pawn buys and sells scrap gold, and power tools to give just two examples. The website frequently ranks in the top 3 for those searching these phrases.

Rankings for “gold” related searches were minimal when we started back in 2019.  In a very competitive market, the website today ranks in the top 10 for dozens of gold related searches such as “cash for gold”, “pawn gold” and “where to sell scrap gold”. The high rankings are not just in Meriden but statewide in Connecticut.

A regular blog was started to help showcase the expertise and value of the business to both potential customers and to Google.  Articles such as “Why do gold buyers ask for id” and “Best items to pawn 2020” ranked first nationwide and helped to show that Meriden Pawn is a serious contender as a gold buyer and pawnshop in the state of Connecticut.

The clear choice in Connecticut?

Meriden Pawn had a very respectable 41 Google reviews when we started working with them in April 2019.  The reviews had come in steadily since 2013, but not many in a year since the date we started working with them.  As a local SEO agency, we greatly appreciate the effect positive reviews have on a local business such as Meriden Pawn.  As we do with most of our local SEO clients, we employed a review strategy with them. The strategy incorporated posters in the shop and scannable QR codes, and other digital tactics. Our strategies made it easy for customers to load up the Google review form and leave a positive rating.

Through working with us, in little over a year the number of reviews has more than tripled. Reviews for Meriden Pawn number 153 at the time of this writing (a 173% increase).  Many of these ratings are a solid 5 stars. Meriden Pawn maintains an  exceptional average rating of 4.6 at time of writing.  No one searching for a pawn shop or gold buyer in CT can doubt the sparkling reputation of “The Gold King”.

With the numerous phrases the website now ranks in the first page for and an almost unmatched rating in Google, Meriden Pawn will continue to enjoy reverence in the public’s consciousness for many years to come.

Here’s what Mike Martorelli “The Gold King” had to say about working with Elvin Web Marketing: